I had bought a used Murphy bed with 2 bookcases. We didn’t realize it was damaged until we brought it home . I bought a mattress and a convertible bed frame to house in between the 2 bookcases. I didn’t want to look at a mattress while sitting at my desk. I decided I needed to cover the mattress. The Geembi quilt was the perfect solution. I think it looks awesome!! It also looks like my black cat. 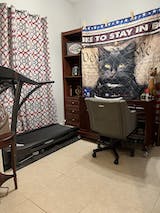 I got the "Bee on the Moon" quilt and it is the perfect new addition to my bedroom! I got it in King size. My fiance noticed the pixelization in the design when he looked at it VERY up close, so maybe a higher resolution digital image should've been used, but personally I don't care, I think it's beautiful! The white fabric backing took a bit of getting used to, but it reminds me to make the bed in the morning so I don't need to see it! 😉 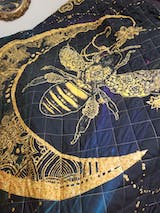 Thank you - the recipient of the gift loved it.

I love my saxophone quite thank you Geembi you're awesome 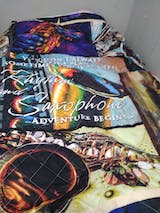 Gave this to my mom for her birthday. She said it was a beautiful design; both soft and comfortable while still maintaining quality in the fabric. She absolutely loves it!

Glad to say that it's finally arrived. My wife loves it, so I'm happy too.
Thank you for the support you supplied while we were waiting, much appreciated. 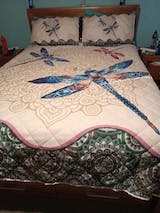 My granddaughter loves her blanket.

It's beautiful! Thank you! 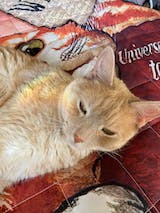 My beautiful bedroom set. Thanks 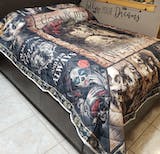 I saw an ad on facebook and loved the turtle one and the verses on it. It is now in our caravan. I then ordered the Aloha one as it reminds me of a fantastic holiday of ours and also got the beach one for the caravan. They are lightweight for summer and can put a quilt or blanket under for winter. Great quality and delivered on time to Australia.

Very happy with the quilt. Surprisingly warm considering it’s not very thick. Looks exactly as it does on the website. Love it! 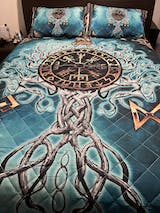 Love my 2 quilts, Awsome quality, Very Happy with them. Will go well in the caravan. Thanks Roadie & Angel.

My husband first saw this blanket on a Facebook ad and showed it to me saying it was pretty cool. I later looked into it for an anniversary gift and saw it was customizable, which I loved. So I ordered it up and it arrived pretty quickly. The blanket is beautiful, the price was great, and it is surprisingly warm for how thin it is compared to my comforter. I actually prefer to use it now on these colder fall nights. 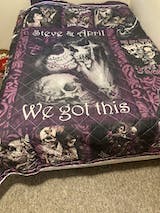 Quilt was perfect for our lake cabin. On time delivery too. 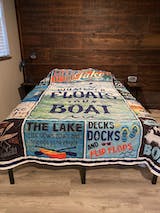 I purchased a quilt from them and the threads were coming apart. I called them and i let them know about my issue and they immediately contacted the manufacturer and got me another quilt. Thank you for the great service 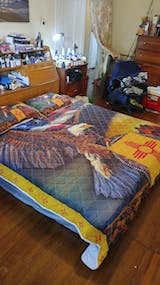 I'm very happy with my quilt. Quality is great soft and bright I've had so much fun putting it together, and company was outstanding, and helpful. 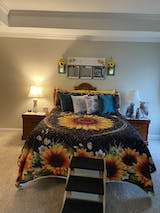 I got it for my grandson'He love trucks, bulldozers, etc. as you can see he was pretty excited to receive it! Thank you! 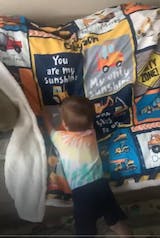 Bought a moon dragon comforter for my oldest child, and it is exactly as photographed. Perfect! Quality of product is great, and even though there were some delays with shipping due to the pandemic, we are very pleased with our purchase. The customer service was very helpful when we inquired about the delay (Thanks, Alice!). So glad there are good alternatives to Amazon. 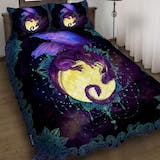 D
Geembi Dianna
Everything was great.

Beautiful quilt. Not as big as I wanted, but I use it as a throw. I've washed it and it comes out looking great. Very happy with it 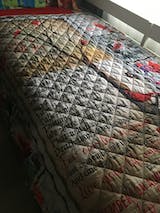 I was a bit leary ordering from here. A new site for me, someone that has let down by certain purchases. However, beings that my daughter graduates high school Thursday, I wanted something that was really special, something practical for future use. I saw this and I just couldn't pass it up. I went for it, then was scared it was going to show up months later than it was it was expected, I did get an email saying it wouldn't be here until somewhere between 6/26-7/12 ...my daughter graduates 6/17... THIS THURSDAY!!! I was so bummed, then I was scared it was going to get here and material be cheap and thin and not worth the money I spent. Friday is 6/15. I came home from work and saw a package thought... what on earth is that? Picked it up and it felt like nothing on earth I would order... so I opened it and low and behold, it was the blanket I ordered! They vacuum sealed it, THAT'S why it felt so strange. Opened up the sealed bag, took it out and was almost in tears. It was so much more than I expected!! Worth EVERY PENNY! It was made VERY well, thick, soft and looks better than the pic on the website. I'm so glad I just sent for it! Thank you Geembi for not disappointing! And thank you for a gift that will be around for many years! All worth the purchase if you have any doubts!!! 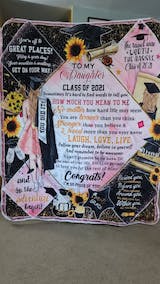 Gave this to my daughter. It was on back order, so it arrived after Mother's Day. She LOVED its design and comfort. 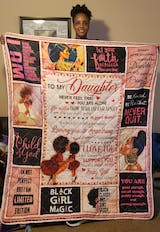 Not only did the package arrive early, the quality was better than expected. I told my daughter it was coming 2 weeks before it arrived. She screamed in excitement and joy creating a moment I will never forget. The item was exactly as it was depicted in the pictures, and though it cost $80 to us it is priceless. Thank you so much to the Geembi Team!! 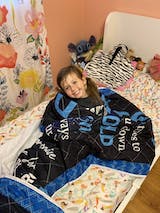 As a vet of 20 plus years, this is a great top blanket. so clear to read and so smooth and soft. 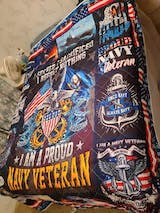 We got the rooster one we love it. 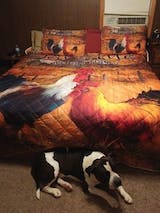